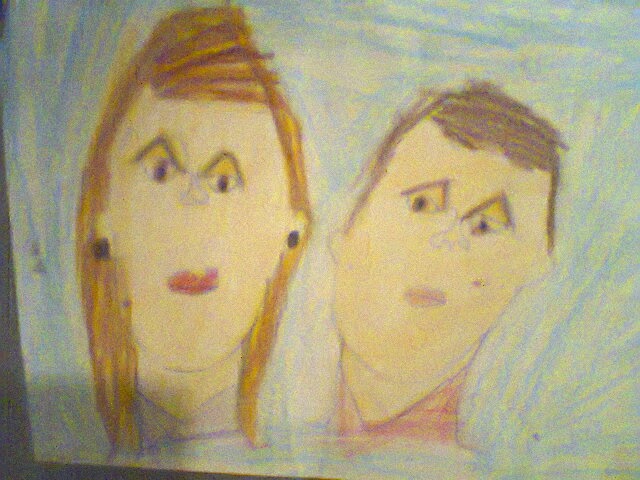 Well, the big palm tree is dead. I really don't know what happened to it. It got some sort of weird spongy fungus and it fell apart.
For real.
I was moving it to a better spot in my room and it went to pieces.
Okay, here's a diagram to explain it better: 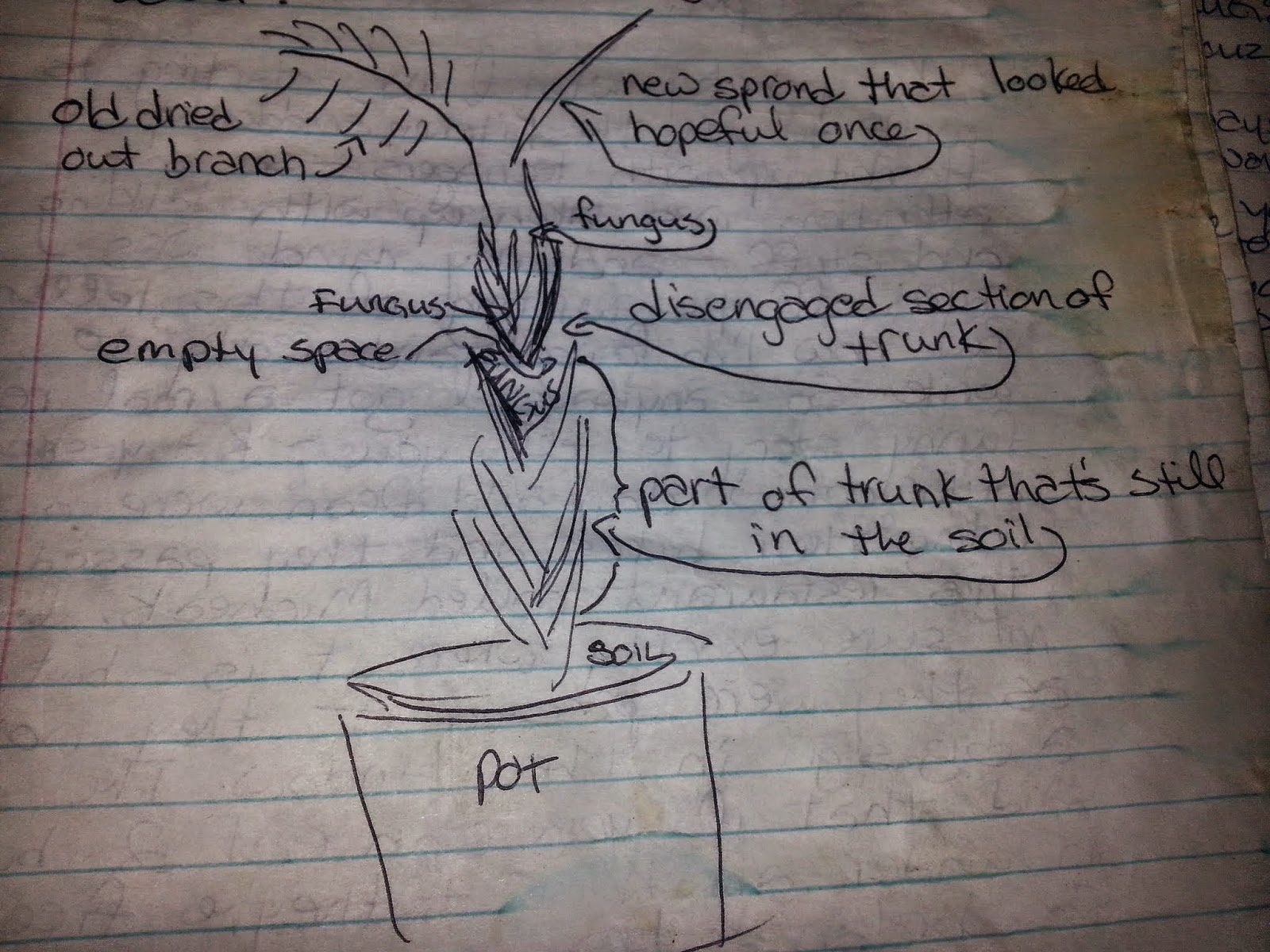 I'm very sad about this.
I guess nothing lives forever, not even potted plants. It was a good tree and I'm gonna miss it.
Funeral will be held later this evening out by the dumpster.
In lieu of flowers, please send roses.

Sally just dropped Joey and Alison off back home here a little while ago.
They were over at Mike and Sal's for a couple days because Joey and Mike were working for Mike's neighbour, building a cow barn.
I don't even think he's Amish.

Anyway, she, (Sally) stayed for coffee. We were sitting here, having our coffee and making small talk..(very small)...and all of a sudden, she tells me that there's a man standing behind me!
She said, so matter-of-factly, that she can actually see spirits and this guy is some sort of ghost.
She said he was tall, with dark hair and he just looked around, smiled, and left.
(What would be the point of that?  What is this? The ghost of a shoe salesman?)
I actually said to her, "Is he dead?"
She said, "Yeah he's dead. He's a ghost."
Thomas called bullshit immediately.
Sally said that actually it was not bullshit and there are, IN FACT, three ghosts living in Thomas's room.
Thomas just rolled his eyes.
Then she said she'd been abducted by aliens!
ALIENS!
No word on why the aliens brought her back.
~~~~~
Here is a picture Joey drew of the barn him and Mike put up: 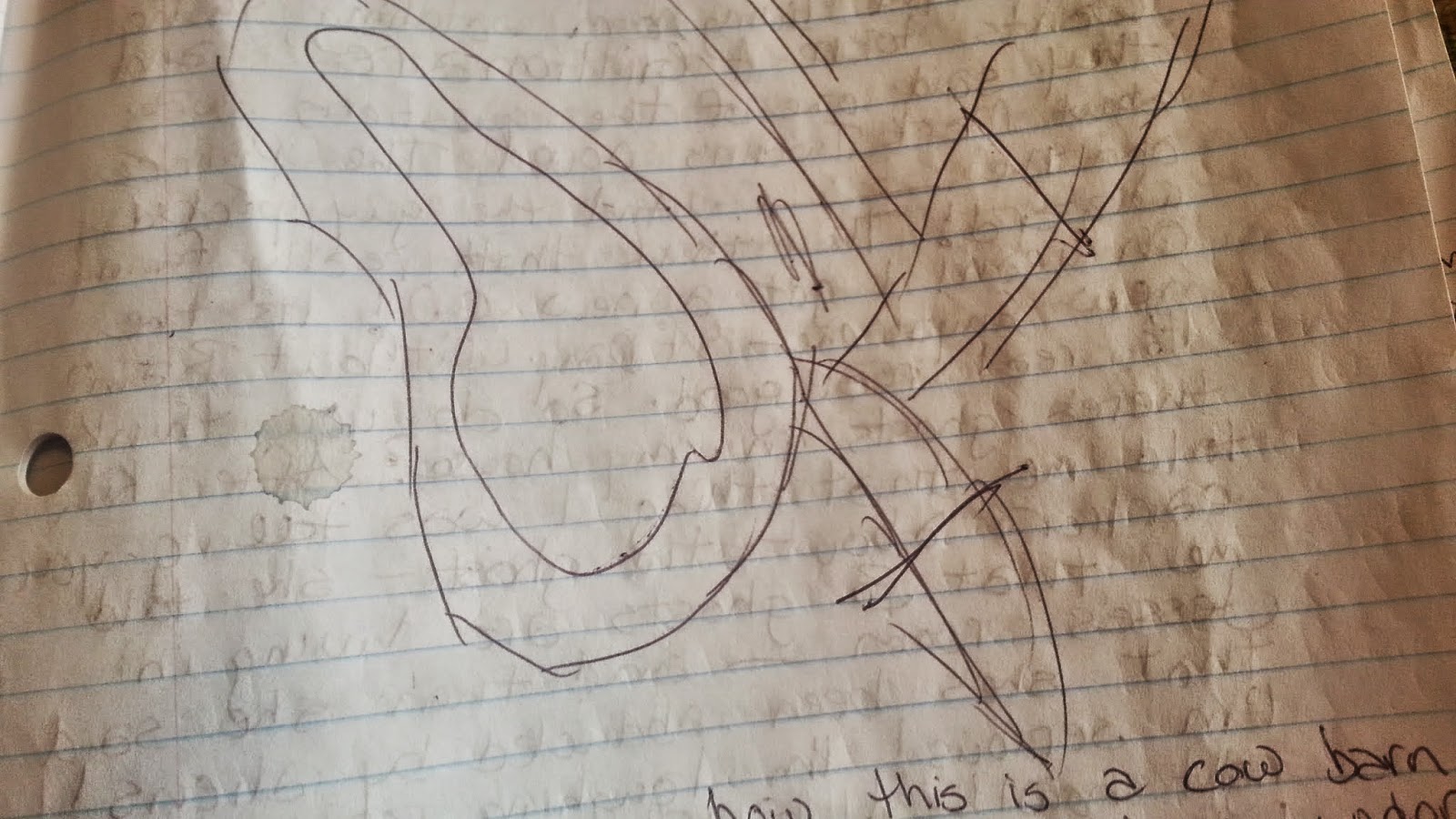 Okay....I'm not sure how this is a cow barn....perhaps Joey studied construction under Picasso.

I'd love to be a journalist.

I have an idea for a self portrait.
It would be a self portrait in pieces. Like, one picture would be just the first knuckle of the pinky on my left hand. Another would be a patch of skin on the back of my right knee. Another could be the middle of my right ear cartilidge.
Of course all of these parts would be on the same canvas...just disassembled.
I think it would be cool.
I'll need mirrors.
~~~
I just started laughing out loud, and I'm here all alone, and suddenly I felt stupid.
I think a lot of people do that...like, maybe you're on the toilet, and you think of something super funny and start laughing...and feel stupid because you're all alone.
But no one else is there! That's the beauty of it.
I think we should be okay with laughing because something's funny, and not restrict our laughter depending on how many people are around.
After all, holding in laughter is the number one cause of sadness.
We should quit feeling stupid in front of ourselves.
It doesn't make any sense.
Posted by E. M. Prokop at 15:18